Perspectives from our researchers, highlights from recent studies, and other news about CCRC 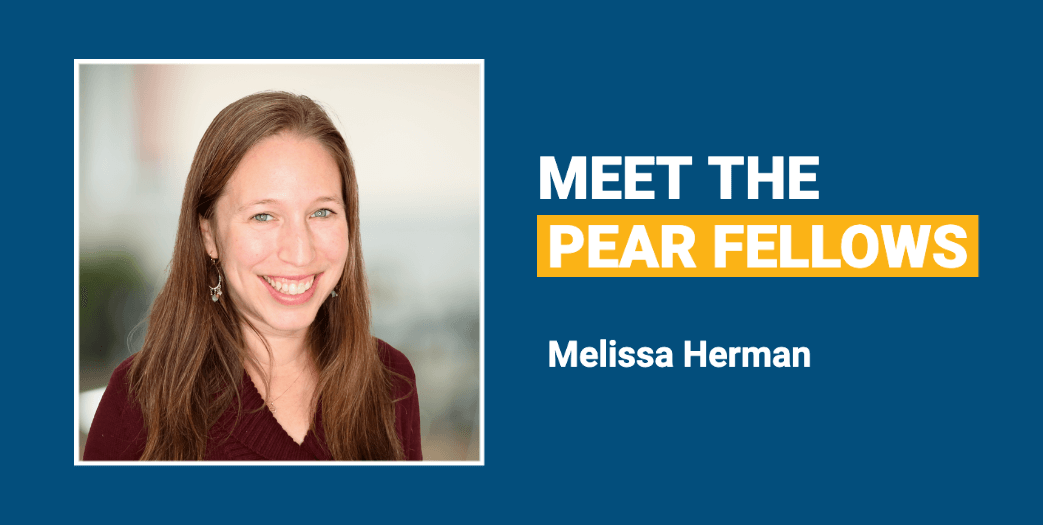 After noticing the lack of diversity on her college campus and realizing that inequities in the K-12 system were partly to blame, Melissa Herman decided to devote her career to expanding educational opportunities for students in her hometown of New York City. A member of our first cohort of Postsecondary Education Applied Research (PEAR) fellows, Herman joins Teachers College and CCRC from the City University of New York (CUNY) and hopes to pursue impact-driven applied research once she finishes her fellowship.

Learn more about Herman’s career and what she hopes to do next below, in the third installment of our series on the PEAR fellows.

These answers have been edited for length and clarity.

What were you doing before you became a PEAR fellow?

For the last six years, I was the director of Graduate NYC, a college access and completion initiative housed at CUNY. I oversaw Graduate NYC’s flagship project, the College Completion Innovation Fund, which is a collaborative fund that brought together about a dozen different funders to support innovative projects in higher education in NYC. I also worked on mixed-methods research projects focused on postsecondary education in New York City.

What would you like to accomplish while you’re a PEAR fellow?

I’d like to learn more qualitative and quantitative research methods so I can conduct applied research to inform the work of our public institutions in New York City, particularly CUNY and the NYC Department of Education.

What does the PEAR fellowship mean for your career?

It means getting the best possible training to answer the types of research questions I’ve tried to tackle during my time in education. The PEAR fellowship will also allow me to turn that research into action for communities across New York City.

What are your research interests?

I am interested in questions around college access and persistence, particularly for New York City public school students. I’d like to investigate things like why students enter community college when they could have secured admission to a four-year school, how we can improve the transfer process for students who start at community college, and how we can ensure equity in our educational processes and allow more students to pursue their postsecondary goals.

What would you like to do after your fellowship ends?

I don’t know! I’m interested in some sort of applied research work that will ideally benefit our large public education systems as quickly as possible.

What initially attracted you to the field? What motivates you to stay in it?

I became interested in education policy immediately upon entering college when I realized how little diversity there was there and how unequal access to education resources created that homogeneity. I graduated from a New York City public high school and felt extremely unprepared for the academic and social environment at a selective college. There’s inherent unfairness in how a high-quality education is provided to wealthy, suburban districts while we underinvest in urban districts and our public higher education systems. That disparity fuels me to stay in this field every day!